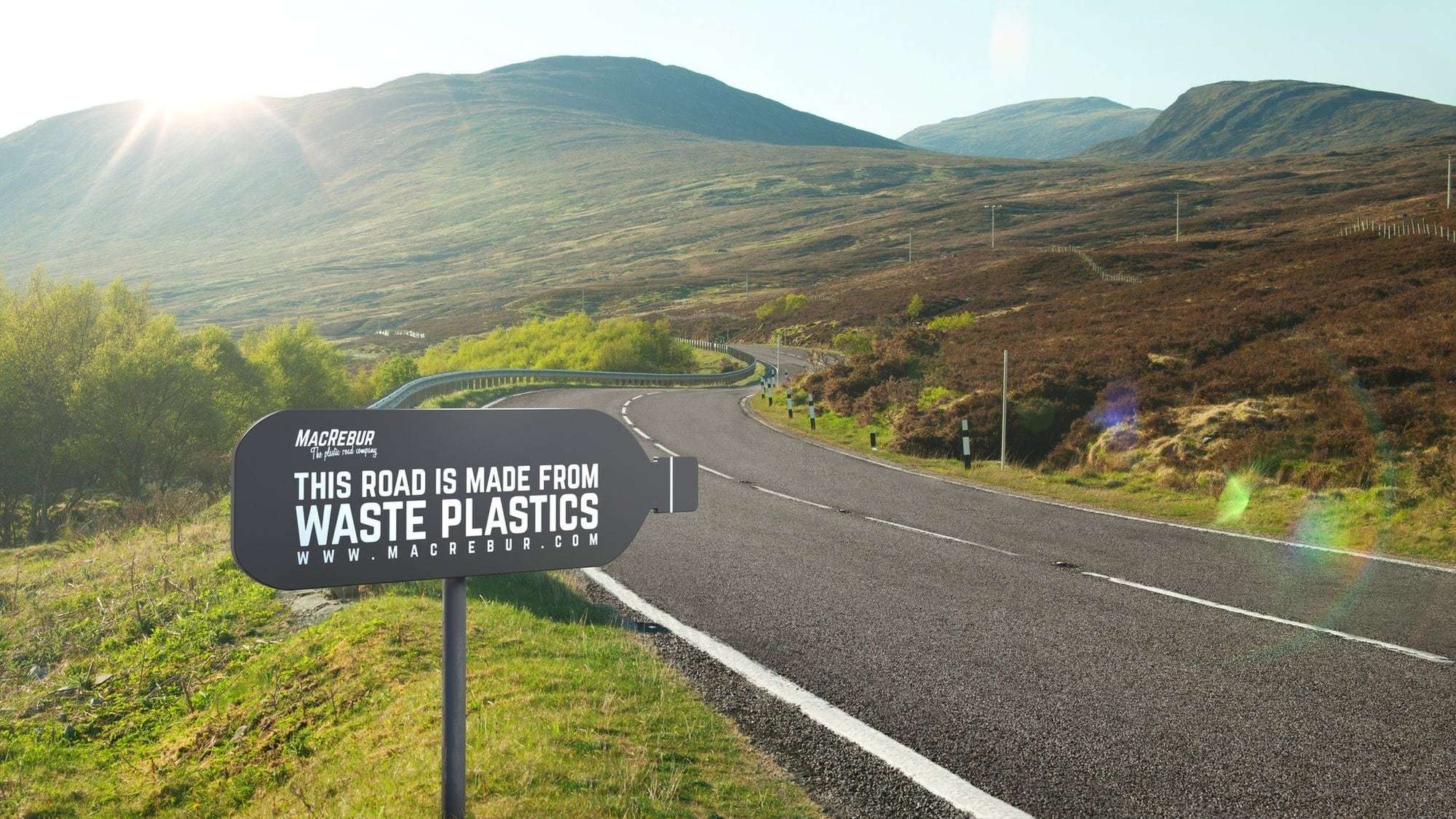 Sometimes it seems anti-pollution and recycling efforts are a long road to nowhere. That’s how engineer Toby McCartney felt, until visiting India in 2016. While on the trip he worked with a group filling potholes using an improvised method combining waste plastic, diesel fuel, and fire. Plastic has been used to construct roads in India since the turn of the century–and McCartney realized the idea could be applied to road construction in other countries, “to solve two world problems… the waste plastic epidemic, and on the other side the poor quality of roads we have to drive on today.”

Upon returning home to Scotland he and two friends started experimenting, melting down various combinations of consumer plastics on his kitchen stove. After going through over 500 different combinations of waste plastics, McCartney and company found polymers that worked and founded a company, named MacRebur, to start building their plastic-enhanced asphalt roads.

Per MacRebur, plastic waste is broken down into small granules and replaces 20% of the sticky, oil-based bitumen that seals traditional roads. The mixed asphalt results in up to 60% stronger, up to three times longer-lasting, and has huge environmental benefits. According to McCartney, each mile of road laid with his company’s product is equivalent to almost 1.2 million single-use plastic bags or 80,000 plastic bottles. For every one-mile, two-lane road, there’s a carbon offset of about 33 tons (equivalent to about 2.3 million plastic bags). Factor in the over four million miles of roads in the US that need to be paved and you start to see the incredible potential of the plastic-enhanced road solution–saving millions of pounds of plastic from ending up in landfills.

The enhanced roads bear no risk of an additional environmental cost. Since the plastic is safely between the stone and bitumen sealant, it can’t easily reenter the environment. “All our plastics are heated to around 180 degrees,” says McCartney. “They then fully homogenize in, so they mix in with the remaining bitumen in the road… So there is no micro-plastic present in any of our roads.” Additionally, the process MacRebur uses never involves actually melting plastic, so no fumes ever escape into the atmosphere.

MacRebur has already paved thousands of miles of enhanced asphalt roads in the UK, and has just expanded to the United States, first Florida and California. While McCartney’s enhanced roads are still relatively new, results have been promising so far, and the company is continuing to expand.

“At the end of the day plastic is a great product,” McCartney told CNN. “It lasts for [a long, which is a problem if it’s a waste product, but not a problem if we want it to last.”
‍
Via Good.is

Through our ongoing partnership with 1% for the Planet, RENY Digital has committed to supporting…

In early 2021, amid the Covid pandemic lockdowns, whilst the planet was drowning in single-use…

RENY stands in solidarity with our Black colleagues, clients, and partners. All of RENY stands…