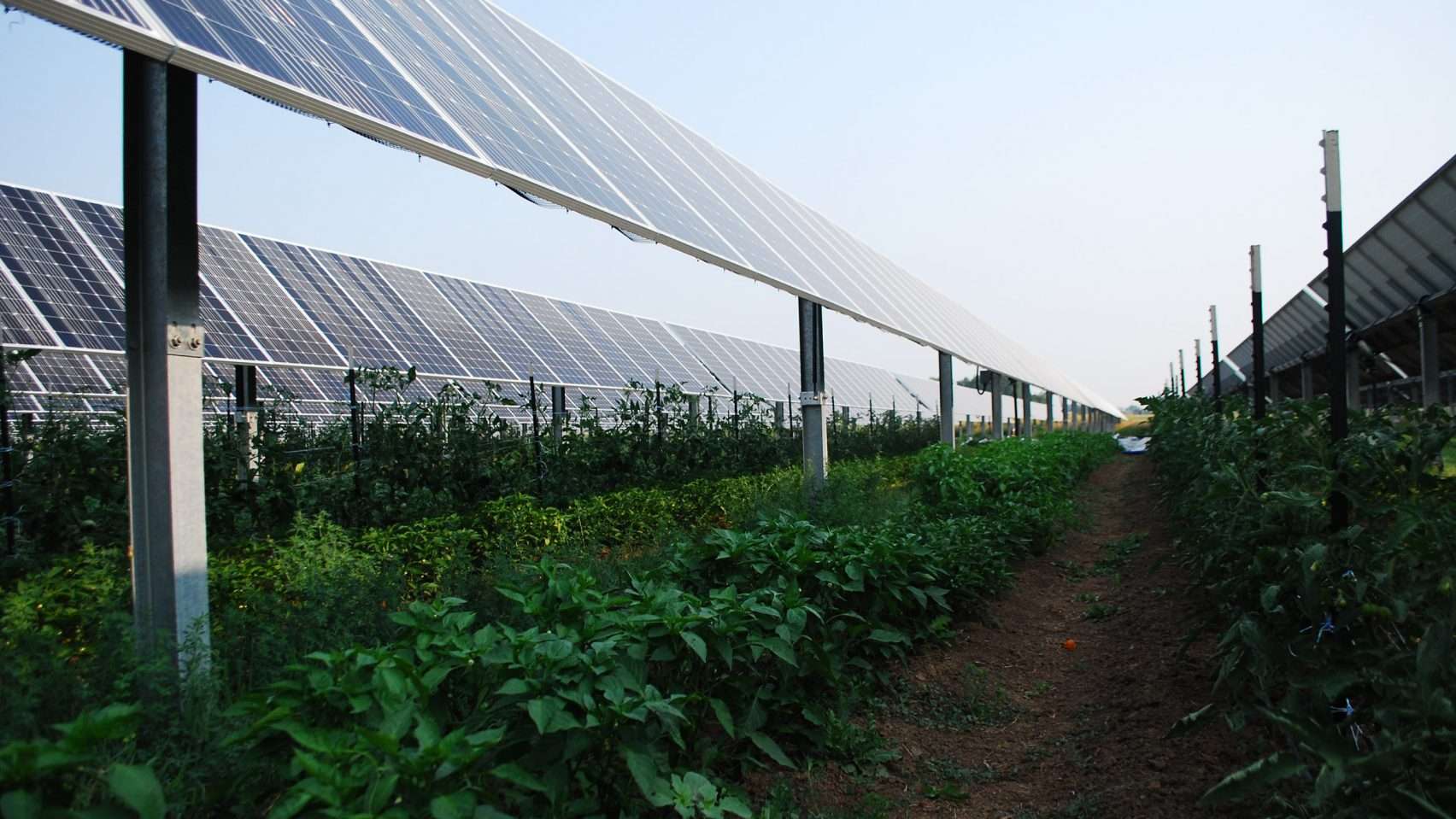 Next-gen solar parks that enable energy and food production as well as waterconservation to work in synergy on the same plot can help to solve solar‘s growing land-use issue, according to the researchers making them a reality.

“There is this big debate around using land for solar versus using it for agriculture,” said Colorado State University researcher Jennifer Bousselot. “And I just roll my eyes because you don’t have to pick. They can be combined.”

“This will be absolutely vital to the future of the energy industry,” added Richard Randle-Boggis from the University of Sheffield. “Especially somewhere like the UK, where sustainable land use is a critical challenge.”

Plants and panels can exist in “symbiosis”

Agrivoltaic solar parks see photovoltaic (PV) panels spaced further apart to allow more sunlight to reach the ground, and raised higher in the air so that crops – or even small livestock such as lambs – can be reared underneath.

When arranged in the right way, studies have found this approach can actually offer compounding advantages such as shielding plants from excessive heat, cold and UV damage, thereby increasing the yield of certain crops.

As global temperatures rise, the panels can also help to conserve dwindling freshwater supplies by reducing evaporation from both plants and soil.

What evaporation does occur underneath the panels has the added benefit of cooling the PVs and boosting their electricity production, according to Randle-Boggis, a research associate at the University of Sheffield.

Top: agrivoltaics are being trialled at Jacks Solar Farm in Colorado. Photo is by Thomas Hickey. Above: the system is also being researched in Kenya. Photo is by Chloride Exide

“It’s a symbiosis because they’re both benefiting each other,” he told Dezeen.

As a result, agrivoltaics don’t just use land more sustainably, they also help to bolster supplies of the most indispensable resources needed for human development – food, water and energy.

“The three resources we’re going to need can all be managed more efficiently in an agrivoltaic system,” Bousselot explained.

“When you think about our population into the future, having 9 billion people by mid-century, we have to start looking at that to build resilience.”

As the world aims to reach net-zero emissions by 2050 in line with the Paris Agreement – and Europe attempts to reduce its reliance on Russian hydrocarbons in the wake of the Ukraine invasion – countries are racing to ramp up their solar capacity.

The UK is gunning for a five-fold increase by 2035 while the EU is aiming to double its capacity in the next the three years.

Meanwhile, the US will need to build enough solar farms to cover the entire state of West Virginia if it hopes to achieve net-zero.

But solar projects are increasingly being refused planning permission and faced with pushback from rural communities and farmers, who are worried that PV arrays will “blight” the local landscape and take fertile farmland out of production.

“There’s a lot of backlash facing the solar industry, especially at the moment,” Randle-Boggis explained. “It’s getting a lot of flack.”

Co-locating wildflowers and solar panels can attract pollinators. Photo is by Hollie Blaydes

To combat these land-use conflicts, a growing body of research is showing how the unused space underneath solar panels can be repurposed to benefit humans and nature alike.

At a more basic level, this can involve planting flowery meadows alongside PV arrays to create habitats for pollinators, which can improve biodiversity and potentially even increase crop production in surrounding farmland.

More advanced agrivoltaic systems, which co-locate solar panels with food crops, have been in development across mainland Europe as well as parts of East Asia and the US for the last 15 years and are now starting to become more common.

Ranging from research projects to commercial operations, these systems recently reached the same solar capacity as the entire UK, skyrocketing from five to 14,000 megawatts between 2012 and 2021.

“Over the last three or four years, it’s really taken off,” Randle-Boggis said.

How much food and energy can be generated from an agrivoltaics project is highly dependent on the location of the system, the crops being grown and the positioning of the panels.

Farmers in darker, colder countries like Germany or Denmark have to use a lower density of panels and space them further apart, so as not to rob the crops of the limited available sunlight.

Here, energy and crop yields are generally slightly lower than on a piece of land that is used solely for agriculture or solar.

But overall, the productivity of an agrivoltaic plot is still higher, Randle-Boggis says, as it is producing two different outputs at the same time.

“Some reduction in yield is still better than growing nothing,” he argued. “It’s about finding that economically optimal balance.”

Researchers are also experimenting with novel technologies such as semi-transparent solar panels, vertical photovoltaic “fences” or grow lights mounted on the underside of traditional panels to improve the yield of agrivoltaic systems in light-starved environments.

System is crucial for drought-stricken regions

So far, some of the best results from agrivoltaic systems have been achieved in harsh, hot growing conditions such as in Arizona, where one study found that the production of cherry tomatoes doubled and chiltepin peppers tripled under solar panels.

“In those settings, it’s so hot and we’re also starting to face droughts,” explained Thomas Hickey of energy company Sandbox Solar. “So if you can put a little bit more shade over those crops, then it will benefit them.”

Randle-Boggis found similar results on a test plot in Kenya, where panels were placed at a higher density to shield crops from sun and UV damage, allowing for higher electricity generation while reducing the amount of water needed for irrigation by 47 per cent and growing cabbages that were 24 per cent larger.

In a climate like Colorado, where Bousselot is running some of the very first test plots dedicated to rooftop agrivoltaics, the panels have also been shown to extend the growing season of some crops by keeping them warmer at night.

“It’s like having a mini greenhouse without sides,” she explained.

Ultimately, Bousselot argues that rooftop agrivoltaics could help to concentrate essential resources where they are most needed, as more than two-thirds of the world’s population are expected to live in cities by 2050.

“It’s a really neat idea because you’re just getting maximum productive use out of an area that’s already heavily developed,” Randle-Boggis agreed.

Uncertainty a hurdle to adoption

Agrivoltaics are currently in their infancy, with researchers still in the early stages of charting what configurations and crops should be used in different climates to create optimal yields.

“There’s so much variability in the results that we’re getting, just because there are so many factors and it is such a new area of research,” Randle-Boggis added.

“It won’t work for every context. So the main focus for solar will still be your typical ground-mounted solar park.”

In an attempt to convert farmers and developers to the cause, Hickey’s company Sandbox Solar is currently developing an agrivoltaic design and modelling software called Spade in collaboration with the National Renewable Energy Lab (NREL).

It will allow users to get a rough idea of what crops and configurations they could use in their local climate, as well as the associated costs and profits based on existing research.

“So you can understand what input costs and what outputs you’ll have – both from the solar and potentially from the crops – and how long the return on investment of that infrastructure would be,” Hickey said.

There are other practical challenges to bringing agrivoltaics into the mainstream.

In general, dual-use solar systems cost more money to install, due to the larger and more complex mounting systems needed to hold up the panels.

Installing rooftop agrivoltaics, for example, can cost three times as much as installing a traditional flat roof, according to Bousselot.

“It is a high initial capital cost,” she explained. “But the long term return on investment is terrific because you end up protecting these [water, energy and food] systems.”

Since agrivoltaics are raised higher above the ground than conventional solar panels, Randle-Boggis says they also need deeper steel foundations and therefore come with a higher embodied carbon footprint.

“They might also be more visually undesirable,” he added. “How that balances with the fact that you’re maintaining the agricultural land is something we will need to find out.”

This post collaboration has been curated from another post online. To view the price, purchase, learn more or view the source of this article, follow this link.

In 1993, the United Nations General Assembly designated March 22 as the first World Water…

With a devastating drought wreaking havoc across the region, Nevada legislators took an unprecedented step…

There’s So Much ‘Green Snow’ in the Antarctic, You Can See It From Space

Welcome to the green, green acres of Antarctica. Yes, you read that right. Scientists note…